Recently, I was a bit early for a lunch date, so I had some time to really read (and enjoy!) the menu at Mia Cucnina.   I  was pleasantly surprised see how detailed their salad menu was.  Usually salads are a hit or miss in Taiwanese restaurants.  One of my favorite salads to date is the roasted pumpkin salad at Les Bebes, and I’ve tried to replicate it several times on my own, with varying degrees of success.

The menu at Mia Cucina carefully lists each ingredient, and the different salad dressings or sauces.  After reading the descriptions, I’m tempted to try some of the combinations on my own.  I also was curious about their balsamic glaze, which is something I’ve never made before.

I decided to order their grilled vegetable salad, and save room for some of their very tempting homemade desserts.

The salad arrived in an enormous bowl.  I was happy to see that it looked just as good as the photograph on the menu.  In addition to romaine lettuce leaves, the salad had grilled corn, asparagus, red bell pepper, carrots, portobello mushrooms, eggplant, red onions, pears, caramelized pecans, and get cheese.  It was dressed with both balsamic glaze and balsamic dressing. 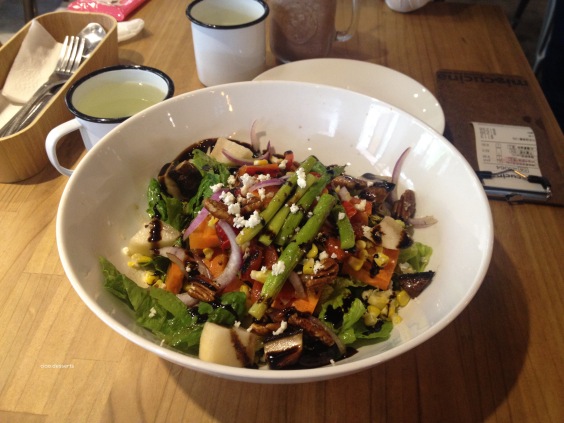 There was a good balance of hard and soft vegetables, and the flavors of the vegetables were well enhanced by the balsamic glaze and dressing. My one bugbear was the inclusion of Asian pears, which I didn’t think really went with the overall combination of ingredients. They weren’t bad, but just a little strange in this bowl. Bartlett pears are not as widely available in Taiwan, so I’m guessing why the Asian pears were there. I also really liked how they cooked the carrots (I think they were lightly blanched then grilled) By doing so, they matched the texture of the rest of the salad. (Something about raw carrots mixed in with grilled veggies really bug me, but I can’t exactly put my finger on why)  The other ingredient that added sparkle to the salad was the toasted pecans. I had forgotten how much I liked pecans, until we were reacquainted this afternoon.

(By the way, I was able to eat the entire bowl on my own. Never underestimate my ability to put away veggies…and still have room for dessert :D)

Speaking of desserts, Mia Cucina has a dazzling array of options. They are home to the “cruffin” (combination of muffin and croissant) .

After much deliberation, I decided on carrot cake.  It was a lovely three layer cake, each layer had a generous, but not overwhelming portion of cream cheese frosting.  The frosting was just the right balance of sweet and tanginess, the cake had a moist, cinnamon-y flavored crumb, and was crowded with shredded carrots, raisins and walnuts. Delicious.

The food at Mia Cucina can be described as food that both comforts and nourishes you. The have a good selection of healthy and decadent options, and you can easily mix and match, or share so you can taste several different items.  One part that I took away from the experience is how well they adapted their salads to suit the surroundings and Taiwanese palate.  A lot of their ingredients are grilled (several of the Taiwanese people I know do not like to eat raw vegetables) and most of the ingredients used are are easily found in Taiwanese grocery stores.  Sometimes I try to replicate a more “western” salad at home, and I end up spending too much money on imported ingredients, so I am always inspired by salad combinations that use ingredients that can be bought locally.

The restaurant was crowded, even for a weekday, so it was impossible to get a clear shot of the workstation where the salads were being made.  But from what I could see from my chair, each ingredient is prepared ahead of time, and stored in a specific box.  After being ordered, different combinations were assembled into large bowls, and then drizzled with dressing.

I was thinking this is something I can do in my everyday life, and save myself  from eating sad desk lunches at work!  Summers are torture in Taiwan, and I never want to leave my air-conditioned office to buy my lunch. I usually bring something from home, or buy an rice ball from 7-11 before going in for the day.  These are ok, but not especially satisfying meals, and by 4pm, I start craving cookies.  So my new plan is to buy, organize, and grill some of these vegetables over the weekend, and assemble salads during the week. I also want to try making my own balsamic glaze. I’ll keep you posted on my progress! Stay tuned. 🙂

(This was not a sponsored post. I paid for all items with my own money, and all experiences and opinions expressed are my own)