This is one of those recipes that lets you feel like an extremely fashionable Kitchen Wizard.  Magical miracles happen to sugar, milk and cream, and of course we all know that salty caramel is totally the rage these days. (Thanks for the tip, Peter!)  I may not be the most fashionable when it comes to clothes/shoes/handbags, but maybe with ice cream, I’ll have a shot at being very trendy, indeed.

When I was deep into my ice cream research phase, I found that several people mentioned Jeni’s Splendid Ice Cream.  I did some online searching and found that she had written a recipe book.  When I emailed this discovery to my best friend in the U.S., she mentioned that she had actually eaten the ice cream at Jeni’s original Ohio location, and said it was, “the best ice cream ever!” That’s really all the encouragement I needed to go out and buy the book.  I found my copy at Page One, the bookstore in the Taipei 101 building.  In a fit of efficiency, I also found all the ingredients I needed for the Salty Caramel Ice Cream downstairs at Jason’s grocery store.  Before I delve into the process of making Salty Caramel Ice Cream, I just want to mention that Jeni’s book is really a feast for the eyes.  The book is beautifully laid out, with gorgeous photographs and clear instructions.

Jeni’s ice cream recipe is different than any of the previous types that I’ve made.  In contrast to other recipes, such as David Lebovitz’s, Jeni’s recipes do not contain eggs, and include cream cheese, corn starch and corn syrup.  These three ingredients all contribute to the ice cream’s texture.  The cream cheese is added for scoop-ability.  The cornstarch is added to absorb ice crystals that might ruin the texture of your ice cream.  Corn syrup keeps sugar crystals from forming, and also helps to keep the ice cream smooth. The first few times I’ve made Jeni’s recipes, I included the corn syrup.  One time I accidentally left it out, and it didn’t make a noticeable difference in the taste or texture of the ice cream, so I’ve left it out since then.

The brand of cream cheese that is easily available in Taiwan is Kraft’s Philadelphia.  I find it easiest to divide up the entire package of cream cheese into the right portions (1.5 ounces)  in one go.  That way I don’t have to get out the scale every single time. 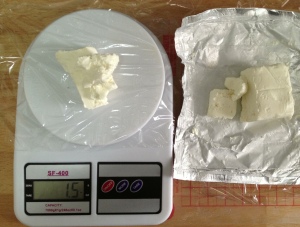 Measuring out portions of cream cheese for future use

I wrap the weighed portions individually and store them inside a plastic container, for later use.  Note that this recipe involves some prep work.  One of the first steps is to combine the sea salt with the cream cheese.

Another step is to make the cornstarch slurry, with a few teaspoons of the milk and the cornstarch.  Set both of these bowls aside for the time being.  另外要準備勾芡

The most exciting of this recipe is preparing the caramelized sugar.  This recipe uses the “dry burn” technique.  Which means a lot can happen in a short amount of time!  (Also, this is the occasion to bring out one of your older pots, because sometimes the sugar burns and sticks, and you may risk ruining one of your more beloved pots.  (I apologize in advance for all the photos showing this much abused pot that I found way in the back of one of the cupboards~ I knew I kept it for a reason!)

The sugar beginning to melt

In all honesty, it took me several attempts to get the sugar caramelized correctly.  A few times, I was too chicken to let the sugar “burn” enough, and the “caramel” kind of tasted like… melted sugar. A few other times, I went overboard, and the carmel tasted scorched and bitter.  其實焦糖是非常難拿捏。 不夠焦， 味道就想糖水。 太過焦 味道就苦苦的 所以要耐心的慢慢試！ 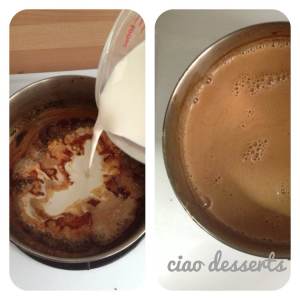 Adding cream and milk to the caramel

It’s absolutely critical to let the mixture simmer over medium heat for 4 minutes.  I didn’t the first time I made this ice cream, and the ice cream’s final texture turned out to be a little icy.  (This step is used to remove the water from your mixture)  After this step, you add in the cornstarch slurry and let the mixture simmer for another minute or so, until the mixture is thickened. (The cornstarch is added to absorb any additional water, which may also affect the texture of your ice cream)

The final step of this stage is to combine the mixture with the cream cheese.  From experience, I find it easier to whisk the hot caramel mixture into the cream cheese a little bit at a time.  This helps you avoid little bumps of cream cheese in your final mixture.

Blending in caramel and cream mixture with cream cheese

Sometimes, despite best efforts, there still will be some stray bumps of cream cheese left in the ice cream mixture, but I just use a strainer to filter them out.

Instead of pouring the mixture into a large ziplock bag as Jeni suggests, I just left it in the original mixing bowl, and submerged it into a larger mixing bowl filled with ice, for about 40 minutes. 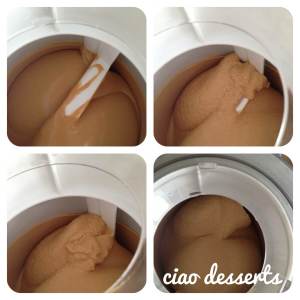 I’ve gradually found  that a rubber spatula is a bit too flimsy to efficiently scoop the ice cream out of the canister.  The only other available tool that I had  which wouldn’t scratch the surface was a rice paddle.   (I’m happy to share that it works really well for this purpose!)  對！ 沒看錯！ 就是用盛飯匙把冰淇淋挖出來的 ～我意外發覺是一個超級適合的工具 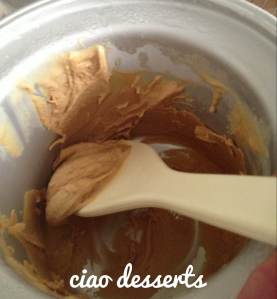 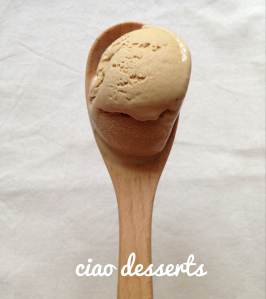 The process of making this ice cream is a little nerve-wracking,  but the results are SO worth it.  The caramel flavor is rich, and the sea salt adds a nice contrast to the smoky sweetness.  The texture is creamy and scoop-able, similar to store-bought ice cream.  （The scoop-able texture was the same even after a few days in the freezer）.   Salty caramel is one of those ice cream flavors I make whenever I have the time, so I can keep an “emergency” batch in the freezer, next to its less trendy, yet classic peers, like vanilla and chocolate, and the up-and-coming Roasted Cherry.  I find that the salty caramel flavor goes well with so many different types of desserts, like apple pie or brownies.  Of course, it’s also fabulous on its own.  Enjoy!

Danger! This is the dry-burn technique. I don’t add water to the sugar before putting it on the heat, as some chefs do. Caramelizing sugar dry means it goes faster, but you have to watch it more closely and be ready with your cream. Here is an overview of what you are going to do:

Stand over the pan of sugar with a heatproof spatula ready, but do not touch the sugar until there is a full layer of melted and browning liquid sugar on the bottom with a smaller layer of unmelted white sugar on the top. When the edges of the melted sugar begin to darken, use the spatula to bring them into the center to help melt the unmelted sugar. Continue stirring and pushing the sugar around until it is all melted and evenly amber in color — like an old penny. When little bubbles begin to explode with dark smoke, give the sugar another moment and then remove from the heat. Immediately but slowly pour about 1/4 cup of the cream and corn syrup mixture into the burning-hot sugar. Be careful! It will pop and spit! Stir until it is incorporated, then add a bit more cream and stir, then continue until it is all in.

Mix about 2 tablespoons of the milk with the cornstarch in a small bowl to make a smooth slurry.

Whisk the cream cheese and salt in a medium bowl until smooth.

Mix the cream with the corn syrup in a measuring cup with a spout.

Fill a large bowl with ice and water.

Heat the sugar in a 4-quart saucepan over medium heat until it is melted and golden amber in color (see note above). Remove from the heat and, stirring constantly, slowly add a bit of the cream and corn syrup mixture to the caramel: It will fizzle, pop, and spurt. Stir until well combined, then add a little more and stir. Keep adding the cream a little at a time until all of it is incorporated.

Return the pan to medium-high heat and add the milk. Bring to a rolling boil and boil for 4 minutes. Remove from the heat and gradually whisk in the cornstarch slurry.

Bring back to a boil over medium-high and cook, stirring with a heatproof spatula, until slightly thickened, about 1 minute. Remove from the heat. If any caramel flecks remain, pour the mixture through a sieve.

Gradually whisk the hot milk mixture into the cream cheese until smooth. Add the vanilla and whisk. Pour the mixture into a 1-gallon Ziploc freezer bag and submerge the sealed bag in the ice bath. Let stand, adding more ice as necessary, until cold, about 30 minutes.

Pour into frozen canister and spin until thick and creamy.

Pack the ice cream into a storage container, press a sheet of parchment directly against the surface, and seal with an airtight lid.

Freeze in the coldest part of your freezer until firm, at least 4 hours.